HomeBlogPublicity campaign: Killing is not healthcare

Publicity campaign: Killing is not healthcare

MONTREAL, May 5th 2013 /CNW Telbec/ - The publicity campaign Killing is not healthcare is currently in full swing in the Quebec mainstream media. The Living with Dignity and Collective of Doctors for the Medical Refusal of Euthanasia organisations have joined efforts in order to heighten public awareness to the inherent risks of the legalisation of doctor provoked-death. The Quebec government is actually planning to legalise « medical aid in dying », which in reality is nothing other than euthanasia by another name.

The 500 physicians and other members of these groups have expressed their deep discomfort faced with the possibility of such a bill. They affirm that with all the new possibilities that have derived from modern medicine, there is no need for euthanasia in order to soothe patients in end of life. The experience drawn from countries where euthanasia is legalised equally demonstrates that grave misuses are inevitable and put our society's most vulnerable people in danger.

To watch the 30 second pub, go online to the websites : www.vivredignite.com and www.soignertoujours.com 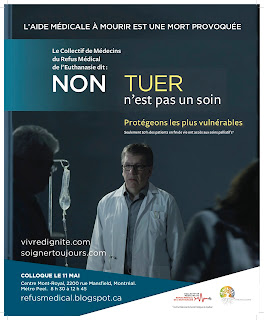 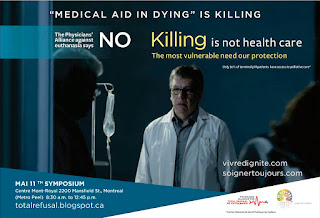 May 11th seminar: Protecting the most vulnerable 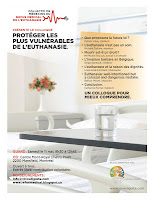 The public, the medias and health professionals are invited to a seminar called Protecting the most vulnerable from Euthanasia.

Seven guests representing the different fields of medicine, law and philosophy will speak, notably Dr Balfour Mount, founder of North American palliative care, and Dr Patrick Vinay, director of palliative care at the CHUM. The seminar will take place on Saturday May 11th at the Mount-Royal Center (2200 Mansfield, Montreal. Peel metro station.) from 8 h 30 to 12 h 45. The speakers will be available to meet with journalists from 10h45 to 11h and from 12h45. For more information, consult the following websites : www.vivredignite.com and www.refusmedical.blogspot.ca

During the 23rd annual congress for the Quebec Palliative Care Network, which started Sunday morning, Prime Minister Pauline Marois announced the investment of 15 millions $ in palliative care. Living with Dignity, as well as the Collective of Doctors for the Medical Refusal of Euthanasia, applaud the decision while reminding that this investment does not legitimate "medical aid in dying" - a concept that goes against the philosophy and goals of palliative care. According to them, this situation explains the public perception relating to end-of-life suffering and their open-mindedness to euthanasia as a solution. A universal access to palliative care would offer Quebecers quality care until natural death and would almost annihilate requests for euthanasia in end-of-life.