HomeBlogVigil against euthanasia in Quebec

Vigil against euthanasia in Quebec

As the MNAs started debating preceding a final vote on Bill 52, a good number of citizens braved the cold last night to express their opposition to this government project. Around 200 people held a vigil against euthanasia and Bill 52 in front of the Quebec National Assembly. 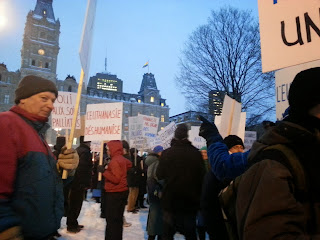 Coming from the four cornes of Quebec, they peacefully demonstrated. Dr. Claude Morin of Rassemblement québécois contre l'euthanasie, Dr. Catherine Ferrier from the Collective of Doctors against euthanasia, Dr. François Primeau and Nicolas Steenhout from Living with Dignity encouraged the demonstrators to continue their fight againt euthanasia. Other citizens also made impromptu speeches. 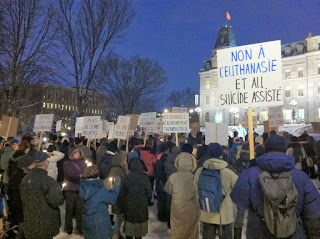 Each one and other witnessed their experiences in a convincing and touching way, whether as health professionals, as patients or as caregivers. They denounced the risks that Bill 52 represents for vulnerable people like the elderly or the handicapped. Everyone agreed on the uselessness of the Bill when modern medecine can soothe pain, including the most persistent pains – thanks to palliative sedation (which is already legalized). They reminded everyone that Bill 52 went against the Canadian criminal code.

Even though the media was invited, none came to cover the event...

The National Assembly risks adopting the bill today or tomorrow. The opposition has already promised to not give up.