Unlike our opponents, we do not receive any government funding and the Canada Revenue Agency has just denied us charitable status, while Dying with Dignity Canada has been granted charitable status! 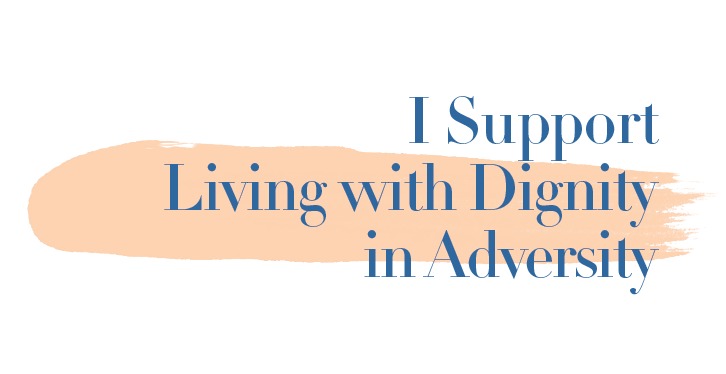 The Living with Dignity Citizen Network rarely communicates with its allies by mail. We did so this fall season for the first time since June 2019, because we are faced with a grave injustice and hope that you will support us financially.

This email reproduces the content of our letter though not graphically.

If you received our mailing or newsletter and have already sent your donation, we wish to thank you most sincerely.

After more than a decade of representing you in the public arena (our founding dates back to May 2010), LWD remains more relevant than ever in the Quebec and Canadian landscape. Current events tragically confirm this. At the heart of all the debates on the expansion of access to “medical assistance in dying / MAiD” (Bill C-7 at the federal level, a Select Committee at the provincial level, etc.), Living with Dignity remains the most active group in Quebec denouncing the many abuses of euthanasia.

With your help, we are pursuing our mission : “to promote the protection of life, the inherent dignity and accompaniment of people made vulnerable by illness, old age or disability”, while proposing “The Treasure of Palliative Care” as evidenced by our new video series. If you haven’t seen it yet, check it out at vivredignite.org/treasure. Your donations make it possible for us to produce such heart-touching tools !

The Treasure of Palliative Care is designed to respond to those who claim that medical aid in dying is part of palliative care (!) and to support those hospices that still refuse to administer MAiD. Remember that they are now part of a brave minority in Quebec (only 18 out of 37 hospices do not offer it). The video series was produced in both English and French, paying tribute to one of Canada’s pioneers in the field, Dr. Balfour Mount, who called it “excellent”. We have shared the series around the world, knowing that many of our international allies will benefit from it.

For the first year, we are releasing an abbreviated version of our annual report via vivredignite.org/2020-2021. In it, we discuss the rejection of our application for charitable status. A surprising decision, to say the least, considering the fact that Dying with Dignity Canada has obtained this status. A flagrant injustice that prevents us from issuing you a tax receipt for your donation.

In addition, the Association québécoise pour le droit de mourir dans la dignité now receives an annual grant from the Quebec government ($123,545). There is now a profound imbalance of resources between us and the advocates of expanded access to euthanasia who can count on full-time staff to advance their ideas. Our current funding only allows us to hire a part-time coordinator. We are grateful to all the volunteer resources at the heart of our mission, but their availability is obviously limited to carry out our goals.

We refuse to give up in the face of the steamroller of the trivialization of euthanasia. Against all odds, we are proud to represent you in reminding all people that the loss of physical or mental faculties never implies a loss of dignity.

In the face of adversity, thank you for
supporting us in a special way this year,

I support Living with Dignity in adversity
with an online donation 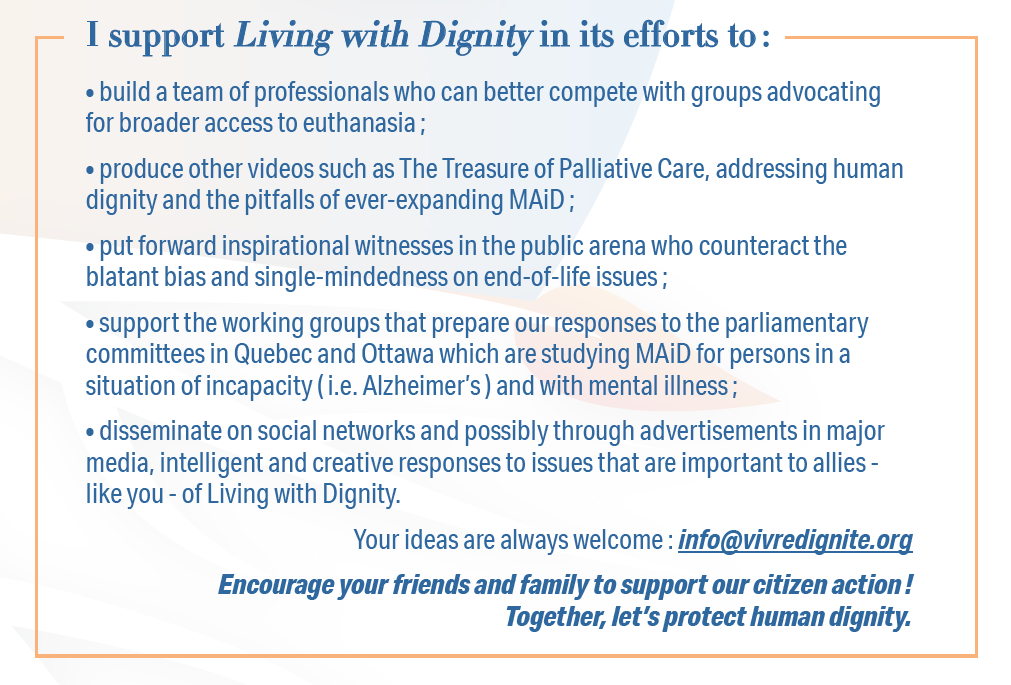